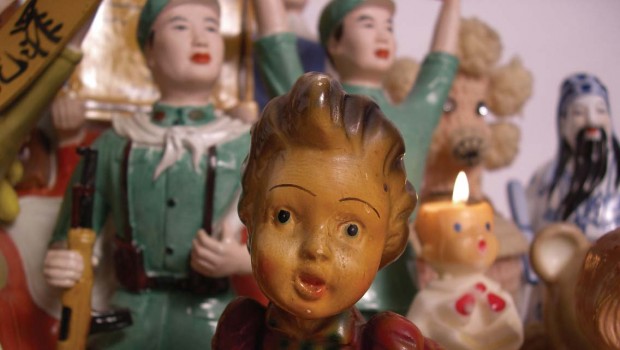 One of the most curious and paradoxical facts about Liliana Porter’s seemingly infantile oeuvre is the often complicated and obscure language that many critics use in order to discuss it. On the one hand, this peculiarity reflects the current state of critical language; but on the other hand, it also evidences the challenge of providing a serious interpretation for an oeuvre that at times appears to amount to nothing more than playing with dolls, while at others it poses true intellectual riddles.

Photography has been the central vehicle of Liliana Porter’s work since the seventies. Since the nineties the objects she photographs are plastic or porcelain figurines of political or religious personalities or part of the inventory of children’s toys and/or comic-book literature. On occasion the figurines are paired so that the viewer is enticed to imagine a dialogue between them. A seminal piece is Dialogue (1996) in which Pinocchio (the deceitful wooden marionette who —after making amends—“becomes” a “real” boy) engages in an imaginary conversation with Gregorio Hernández, the Venezuelan “physician of the poor,” who came to be regarded as a popular saint. Who is lying to whom? Some find a resemblance between the latter and Charlie Chan, the Chinese character of detective movies. Porter herself likens him to the self-portraits of René Magritte, the Belgian Surrealist painter—master of the visual lie—. In works such as The Explanation (1991) she has used Gregorio Hernández qua Magritte, but in To Go Back (2001) it would seem that the figurine has to be Charlie Chan returning to China and to a flat world. The representational lie is a constant in Porter’s oeuvre.

Two important critics, Gerardo Mosquera and Luis Camnitzer, have interpreted Liliana Porter’s photographic work by alluding to Jorge Luis Borges’s literature and René Magritte’s paintings. Porter’s interest in Magritte has a long history; she has quoted him in works like Magritte’s 16th of September (1975), The Great War (1975), La Luna (1977) and more recently, in La Clairvoyance (1999). As far as the relationship of Porter’s work with Borges’ literature, it cannot be visual but conceptual. Although in 1983 Porter produced the work Fragments with Borges’ Book depicting a sample of a book is not tantamount to representing the literary work in the book, whereas depicting a painting is to somehow represent its contents. In spite of the clues in Porter’s works that sustain the interpretations of Mosquera and Camnitzer, it seems counterintuitive that her photographs of kitschy porcelain figurines could fit in the aesthetic horizon of Borges’ cerebral oeuvre or even in Magritte’s Surrealism. Mosquera himself readily recognizes that “Porter has put Lichtenstein’s comics or Haring’s Mickey next to the ‘real’ Mickey.” The task at hand is therefore to understand how Porter’s oeuvre, whose visual antecedents coincide with Pop Art, somehow manages to subvert it.

A work like Dressed Penguin (1996)—which depicts an imagined dialogue between the photographic image of a clay figurine of a humanized penguin and the real figurine of a yellow bird sitting on a little stool—hides subversive traits in its innocent appearance. Porter subverts the genres of representation. Her figurines are already representations, her photographs are representations of representations, and her assemblages are a symbiosis of the former and the latter which forms a set as arbitrary as Borges’ category of animals that “can be drawn with a fine brush.”

Camnitzer’s use of Borges for interpreting Porter’s oeuvre seems more tangential and reflects his own view of Magritte’s work. Camnitzer writes that “Porter decided to confront reality more directly, either by using the objects themselves or through photography as a means to document them.” In this process, “what was refined was the quality of the dialogue of her objects. It was literally a question of establishing what things one object had to say to another and/or to the viewer.” Camnitzer’s main analogy of Porter’s works with Magritte’s oeuvre is that the dialogue between her figurines is reflected in Magritte’s works as “one image turns into the context for the other.” Although Camnitzer does not mention specific works by Magritte, one could propose the paradoxical Ceci n’est pas une pomme (1964), where the text in the painting truthfully denies what the picture verily depicts. Moreover, there are Porter works like Untitled with Fire (1989) that seem to follow Magritte’s surrealist agenda.

According to Camnitzer, for Magritte as well as for Porter, “it does matter who the characters are. (….) Porter’s art does not work with just any object. Her selection is careful and reflects not only the world delineated by Borges, by Alice in Wonderland, and by Magritte, but also by her very personal blend of astonishment, childishness, and humorous distancing.” Camnitzer only mentions two items from Borges’ literary repertoire, and it is not clear how they are reflected in Porter’s selection of figurines. One of the items is the aleph, the extraordinary sphere containing all other points in the universe; and the other is one of the protagonists of the story El Aleph, Carlos Argentino Daneri, who sets out to write a poem about every place on this planet. Nothing of the sort appears in Porter’s work —not even by analogy. Giving Camnitzer massive amounts of foreign aid, one might point out that the split between Borges the author and Borges the character in his dialogue with Carlos Argentino in some relevant way resembles those imagined dialogues between Porter’s figurines. That suggestion may be interesting enough, but how can a written dialogue resemble an imagined one? My question is not rhetorical but sincere.

Mosquera’s use of Magritte in interpreting Porter’s work is more radical. He considers Porter as “Magritte’s natural continuator.” According to Mosquera, Porter “plays with the irony that the work of the Belgian artist goes on to be part of the reality that he is questioning.” However, “there is a typical tone in her work that mixes humor and cynicism with loving warmth.” In La Clairvoyance (1999), she depicts an actual stone and a postcard of one of the Belgian artist’s paintings in which he paints an egg as a bird. The work insinuates that Porter has represented (if the act may be thus called) the potentially airborne postcard as an egg-like stone, or vice versa. Such are the ways of symbolization, as arbitrary as Borges’ animal classification in his Chinese Encyclopedia.

In spite of the parallels to Borges and Magritte pointed out by Camnitzer and Mosquera, Porter may be doing something that is simultaneously simpler and perhaps more interesting. She is letting her characters have the life that their iconic personalities have determined for them. This strategy may lead to all sorts of results depending on the figurine and the mix of representational media. In works where there are mixed media (photography/assemblage) the dialogue between two characters might be imagined to be about their ontological predicaments; like the Square talking to the Sphere about their kinds of existence in Edwin Abbott’s Flatland. This diversity in ways of existing is even impacting, as in the case of Stone (2000), or intriguing as in To Go Back (2001). In works where there is only one figurine and one dimension like in Minnie (1995), the represented space induces the viewer to feel the angst of a graphic and iconic existence.

Porter’s triptych Untitled Out of Focus Che (1991-1995) has received surprisingly little attention by the above-mentioned critics. The work shows a plate with Alberto Korda’s famous image of Che Guevara, the Communist revolutionist, and a figurine of Mickey Mouse. What could they talk about? In the early seventies, a book by Ariel Dorfman and Armand Mattelart called How to Read Donald Duck accompanied and fueled the controversy about cultural alienation in Latin America. One of the issues of the controversy had to do with the way the values of capitalism were inculcated in the minds of the young through comic book characters like Mickey Mouse or Donald Duck. Porter’s triptych conflates by means of the photographic effect of out-of-focus two characters that stood on opposite sides of that controversy. The out-of-focus technique, however, puts both Mickey and Che on the same plane, rendering them both agents of ideological penetration. Perhaps Mickey Mouse is explaining to Che that in Lichtenstein’s hands he too was a revolutionary in the struggle against elitist art.

Porter’s almost childish images bear a visual and playful resemblance to Pop Art works like those of Jeff Koons, Keith Haring and Roy Lichtenstein. Unlike the latter, however, the former show a speculative penchant for dealing with problems of ontology and paradoxes of representation. It is precisely this penchant that Borges, Magritte and Porter’s works share. However, Porter clearly gives her viewers the freedom to fill in the space between the quotation marks that surround her characters’ dialogues or monologues—in spite of Borges, Magritte and Porter herself—. 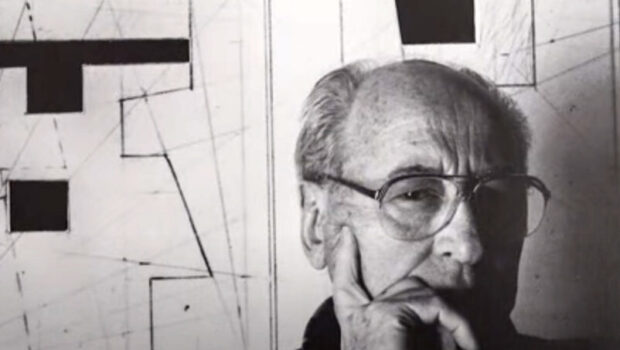 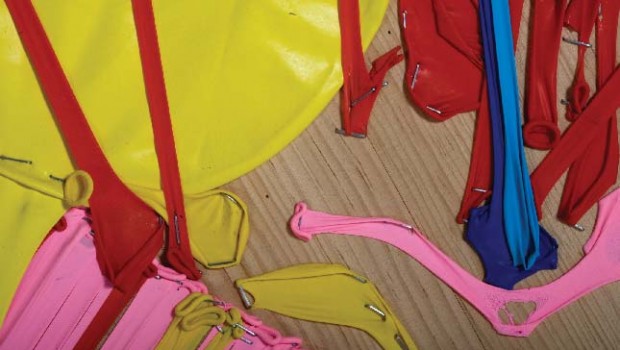 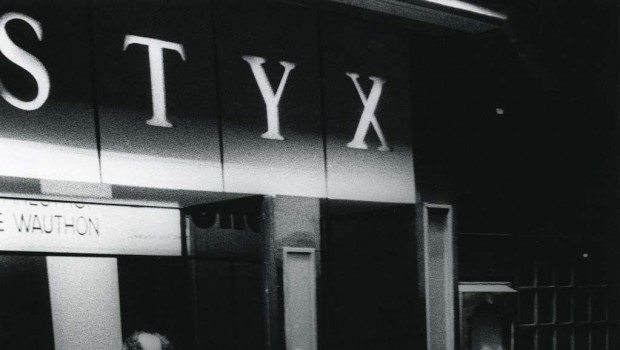 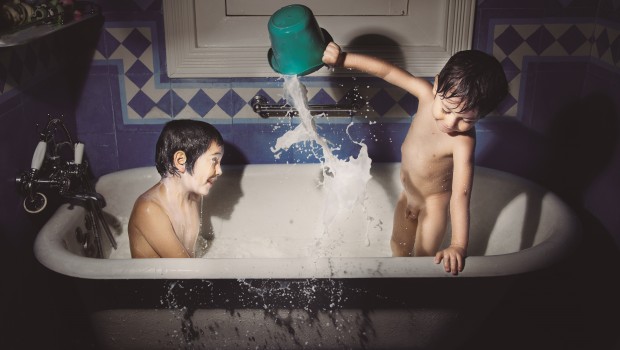